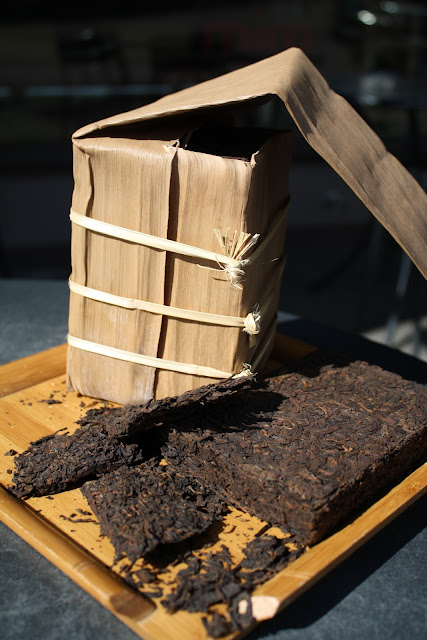 Our next "new" pu-erh has actually got some age on it--it's a 250 gram brick from 2003.  Like our '09 7452 cake it's hard to start talking about this one without raising some common confusing aspects of the pu-erh experience.  For starters, the brick is called "Menghai," and as the last notes mentioned, this tea was created in Menghai county, Yunnan province, but not at Menghai Tea Factory.  Secondly, you can see that this cake is a different shape--indeed, it's not the standard 357 gram bing (disc-shaped cake) into which the majority of pu-erh is pressed; it's a 250 gram rectangular brick.  Though this shape is not the #1 norm, it's relatively common and 250g is the standard brick weight.  You may also notice that these bricks have no wrappers (aside from the bamboo wrapper that holds multiple bricks).
As is sometimes the case with aged pu-erh, this cake was either never wrapped or was removed from its wrappers some time in its eight years of storage.  Although this does mean that there is much less information to verify a cake's age, origin and authenticity (no wrapper, no nei fei pressed into the cake), it usually means that the cake will sell for much less.  In other words, you can get a better deal on an unwrapped aged cake than a wrapped one, and just because it's unwrapped doesn't mean it's not good!  Rather than relying on information provided on a wrapper, though, we have to use our senses to decide whether a tea's a worthy investment. 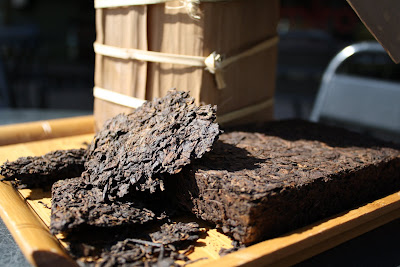 This brick's relatively dry Yunnan storage means that the leaves flake pretty easily off the cake surface--in fact, the brick itself is a bit flexible in hand.  What has struck me most about this cake during tasting is its mouthfeel--it's by far the smoothest and roundest of our three new teas, and there's nary a hint of astringency to be found from start to finish.  The tea liquor is also the darkest of the three--it's a barely penetrable black, even in our glass cups.  While I described our 7452 as the best choice for gong fu brewing, my recommendation for this tea is "Western"-style brewing in a mug or pot--like we serve most of our teas at Miro.  While it does stand up to a few repeated steeps, the body is fullest and most impressive when it's allowed a nice long 5+ minute steep.  Additionally, the flavor more fully develops given some extra steeping time.  The tea isn't quite as complex as the Menghai Factory blend, but it's a brilliant example of ideal mouthfeel for any pu-erh.  The eight years of aging have definitely contributed to this characteristic, as well as the mellowing of the flavor.  There aren't as many high notes up front, and there's little to no remnants of the flavor that freshly-processed ripened pu-erh exhibits.  Some teas seem designed for careful connoisseur attention over the course of numerous steeps.  This one, however, seems best drunk casually on a relaxing afternoon, as it exemplifies the calming, mellowing characteristics to which all pu-erh should aspire.