Here's a preview of another of our new teas--Huang Shan (Yellow Mountain) Mao Feng (Fur Peak). This one is probably even more famous than Liu An Gua Pian, and has an equally long and rich history with processing practices that date from the Qing dynasty. Yellow Mtn. Mao Feng hails from Anhui province and is famous as a tea that is presented by the Chinese government to visiting foreign ambassadors and dignitaries. 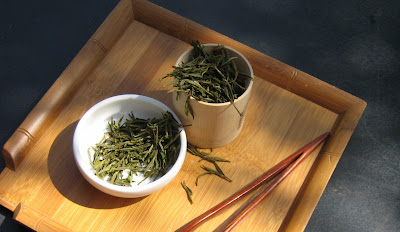 The Mao Feng we'll be receiving shortly is another Special grade green, and it's organic! As you can see in the above picture of the dry leaf, Mao Feng has a very large leaf appearance, with buds and leaves looking almost as if they were dried right on the tea bush! Upon closer inspection, though, you can see that in the shaping/firing process, the leaves and buds are twisted slightly, resulting in a branching needle-like appearance that is both voluminous and downy (hence the name "fur peak"). Mao Feng is something of a chimera--since it's such a famous tea, numerous regions in China grow "Mao Fengs" that may or may not be sold under the name "Huang Shan," and their appearances and flavors can vary widely. Like many famous teas, though, a true Yellow Mtn. Mao Feng can be identified by its flavor profile, which is certainly the case with this example. Like the previous tea, we sampled this Mao Feng gong fu style (3.5 grams of tea/120ml water, 170º, starting at 20 seconds and increasing up to about 50 on the 5th infusion) as well as competition style, using hotter water and a long steep time to stress the tea and bring out all the flavors--good and bad. 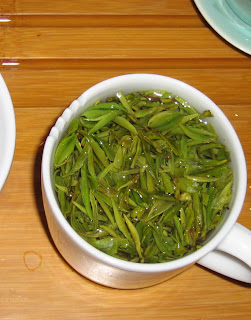 with that characteristic Huang Shan Mao Feng flavor. The first infusion was extremely light--with some teas, you have to restrict the first infusion for fear of overpowering flavor and bitterness. This Mao Feng seemed like it could have taken even more time--the leaves had just begunGong fu brewing revealed this tea to be a very good example of its namesake--exceedingly light in color, body, and mouth-feel, giving up their flavor, though the liquor was totally delicious. The flavor of any famous Chinese green tea defies categorization, but I can say that the aroma of this Mao Feng is a comfortable, even superb marriage of vegetal notes (like fresh, sweet, delicate snap peas, with a slight green-beany-ness) and a sweet, lingering, delicate floral character that prevents the tea from ever coming across as directly vegetal. Compared to the wet leaf aroma, the liquor was surprisingly similar (especially for a green tea), though somewhat less powerful. Subsequent infusions only improved and developed the trademark flavor--2nd and 3rd steepings brought a strong sweetness, fuller body, and ever-so-slight astringency. By the 4th and 5th infusions, the vegetal notes tapered a bit, leaving the liquor somewhat lighter in the mouth but sweeter than ever. 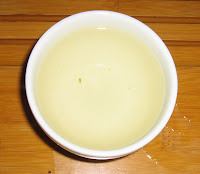 The competition brewing was especially promising. Most green teas, when stressed in a competition environment, become bitter and overpoweringly bitter. This Mao Feng offered up a somewhat darker liquor that held a low to moderate amount of astringency and a deceptively full body, with no bitterness. In some ways, it was like doing the gong fu brewing on fast forward--all the changing flavors were there, but in one punchy mouthful. For this reason, I'm happy to be able to recommend this tea as a worthwhile gong fu option as well as an excellent tea for a quick, easy mug made with a 2 or 3 minute steeping. The only thing I can't recommend this Mao Feng for is a meal accompaniment--this type of green tea is such a delicate treat that it's best enjoyed on its own and would likely be overwhelmed by most any flavor of food. There are higher and more expensive grades of Mao Feng out there, but this excellent example brings characteristic quality (a reasonably uniform leaf appearance included), freshness, and flavor at a very affordable price. I'm eagerly awaiting our shipment of this Huang Shan Mao Feng. Until then, please enjoy this shot of some spent leaves, which displays the selection of one bud-one leaf and the lovely color of this early spring tea. 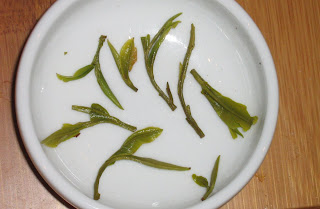