November is over half over and I've yet to announce the tea of the month to our online audience. We're celebrating pu-erh tea this month. All of the usual benefits apply--we've got informational handouts and samples in the store, and all of our pu-erh stock is 15% off for the month. If you're unfamiliar with pu-erh, you can check out the rather lengthy introductory article I compiled in May. A Google or Wikipedia search will also deliver some good results--pu-erh is becoming quite a craze in the West (it's been extremely popular in Asia for at least 10 years though) and there are a lot of enthusiastic bloggers and hobbyists online. In a market saturated by the mediocre, cheaply-made pu-erh that has become commonplace since pu-erh's recent surge in popularity, we're happy to offer several choices that don't have much trouble distinguishing themselves from your average teas! I'll hopefully be able to present several of our pu-erh choices before the month is over, starting with this 2007 Xi-Zhi Hao 8582 sheng (raw pu-erh) cake. 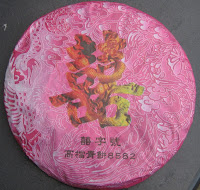 Xi-Zhi Hao (Double Happiness) is a premium pu-erh line produced by San Ho Tang pu-erh factory. The owner, Mr. Chen, began researching the historical pu-erh production methods in the 1990's and began producing his own pu-erh at the end of the decade. Today, Xi-Zhi Hao stands as some of the highest-end (quality-wise and price-wise) pu-erh available on the market. Essentially what makes this type of tea high-end is the leaves--since the late 90's there has been a surge of interest from pu-erh collectors and producers in using "ancient," "wild," "arbor" or "tree" pu-erh leaves (as opposed to plantation leaves, which can vary in quality). These leaves come from either completely wild tea plants or from plants that were once cultivated but have grown wild for decades. Generally the plants are very large (more tree-like than bush-like), and the leaves are sized to match; vigorous, bold and healthy-looking, with bold but complex flavor and high propensity for successful aging. Leaves of this type come from very specific (usually mountainous, like "Yiwu," for example) areas in Yunnan province, China, and there are only so many leaves to go around (hence the high price tag). Manufacturers will often label their tea cakes with these words when they only have a small percentage of the old, famous-mountain leaves, but the Xi-Zhi Hao brand has a good reputation for quality and reliability with their "ancient tree" pu-erhs. In addition to their heralded super-premium pu-erhs, they have also produced some outstanding upper-mid-level pu-erhs. This cake falls into that category--high quality leaves which are mostly from plantations around Menghai county. The title "8582" refers to the classic Menghai Tea Factory blend recipe, which was provided to Xi-Zhi Hao by an ex-Menghai factory master blender. Menghai has been a quality-standard pu-erh brand for decades, and this blend ("85" for 1985, when the recipe was invented, "8" for the "level" or "grade" of leaves used, and "2" meaning Menghai Tea factory) is designed to recapture the pu-erh quality that existed when this recipe was new. 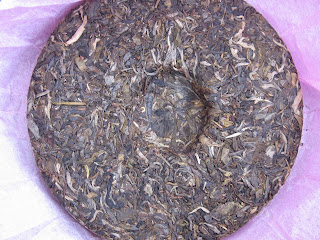 You can see in this picture that the cake is composed of nice-looking whole leaves, and there are plenty of silvery buds visible on the surface, which lets you know that this should be a pretty sweet-tasting pu-erh. Since the cake is very young, there is plenty of contrast between the buds and leaves. This will change in a few years as the buds gain a more golden coloration. The cake is well-compressed; not as tightly as an "iron cake"-styled pu-erh, and not as loosely as a traditionally stone-molded cake. Just opening the wrapper, the aroma floats gracefully out and fills the room.

For tasting, I gently pried off a small chunk (the fewer broken leaves, the mellower and less harsh the tea will brew). 3.8g in a 100ml teapot, with a 20 second rinse to open the leaves up a bit. After that, it was 30-20-30-40-60. Not overly methodical for gong fu brewing, but good enough to catch some of this tea's intricacies. This is a spring-harvested tea, and it tastes that way. It's simply brimming with energy--after a rinse and first infusion, the aroma really dominated our tasting area. Floral, fruity and slightly woody/earthy tones permeate the complex aroma, and depending on when and how deeply you inhale, it can change completely. The liquor is a deep golden color with good clarity. Flavor-wise, this tea has multiple strengths. First is complexity: all of the elements from the aroma are present in the liquor, as is a potent sweetness. Second is hui gan, or "returning aftertaste." The sweet finish pervades long after the tea is gone, which is a very desirable characteristic in a pu-erh. Also notable are a couple absent aspects: smokiness--commonplace among low-end pu-erhs--is virtually zero, which means this pu-erh was processed very carefully, with delicate care during the firing, drying and steaming processes. The other characteristic--bitterness--is somewhat muted and mostly transforms to sweetness in the aftertaste. Bitterness in a young sheng pu-erh is almost universal and is not regarded as a flaw, and it's nice to see that it fits comfortably among this pu-erh's other attributes.

Having tasted some of Xi-Zhi Hao's single-region pu-erhs, I can say that this 8582 recipe cake could be described as less refined, but to me it's also somewhat more interesting--rather than leaves with uniform character, this cake is a blend of different-sized and styled leaves (see the picture below for more evidence of this), which gives it a shifting, active, dynamic, even clamourous(!) complexity that isn't necessarily present in the super-premium cakes. For personal drinking I'd probably use more leaves, but not too much more--this cake can be extremely potent and aggressive if you use too many leaves (partly because it's a spring, plantation cake and partly because it's so young), and I think it tastes best and most complex when it's toned to a more light, floral and ethereal tea like I cupped it today. I'm very excited for this cake's aging potential; the original 8582 Menghai cakes are tasting really good these days, and I can see this cake's complexity becoming really nice as it mellows out a bit. We have this cake available for in-store drinking as well as bulk--1 oz samples or entire 400 gram cakes. With all pu-erh stock 15% off for the month, now is a great time to snag one. Stay tuned for more tasting notes! 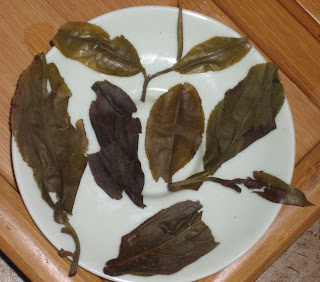