Although we're featuring botanicals this month, I can't help but feature a couple of new arrivals to our tea menu--two Wuyi Yen Cha. I discussed this oolong type in a previous article, back when we had a serviceable but not outstanding example to provide our customers. Now, we've got two outstanding Wuyi oolongs and each deserves its own tasting notes.

As I noted in the introductory article, Wuyi is a mountain and nature reserve in Northern Fujian Province, China. "Yen Cha" means "rock," "crag," or "cliff" "tea," since the area is known for its precipitous mountain cliffs and many of the most famous tea bushes were first discovered clinging to the edges of the rocks. This first tea I'll be writing up is known as Da Hong Pao, or "Big Red Robe." If there is one flagship Wuyi Yen Cha, it's got to be Da Hong Pao--this tea is one of the Chinese 10 Famous Teas and certainly has the most worldwide recognition of all the Yen Cha. Because of its reputation, Da Hong Pao is often subject to falsification. Tea wholesalers will often sell low-grade, extremely high-roast Yen Cha under the name "Da Hong Pao" just to capitalize on the tea's reputation. This sort of practice can ruin the beginning tea enthusiast's experience with Yen Cha--a lot of tea drinkers think all Yen Cha taste the same (extremely roasted) and aren't worthy of attention as a serious tea. The fact is, Da Hong Pao has a characteristic flavor and mouthfeel, so long as the producer is skilled enough at making the tea. This is mostly because "Da Hong Pao" is not only a specific tea (as in beverage), it's also a genetically unique cultivar of tea bush that is reproduced asexually by planting cuttings from a parent plant. The same is true of Rou Gui (known at Miro Tea as "Wuyi Cassia"), our second new Yen Cha. Rou Gui is a less famous Yen Cha, but it is very popular in China as a solid Yen Cha choice. Rou Gui is so-named because of its cinnamon-like cassia aroma and flavor, which are more pronounced in higher grades. 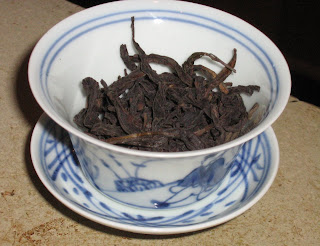 Sitting down to taste our two new Yen Cha was a real pleasure, since they both exhibit the classic characteristics of high-quality Yen Cha but definitely taste distinct from one another. In addition to offering tasting impressions for these two teas, I hope these posts will serve as aids for brewing Yen Cha gong fu style; they can be tempermental, especially when used for multiple steepings, but a couple steps will greatly improve your drinking experience. The first step is to "stuff the pot." As you can see in this picture, my tiny (90 ml) gaiwan is about 3/4 full of leaf (over 5 grams worth!). This is a crucial step; for one thing, Yen Cha leaves are not especially tightly-rolled, so they look bigger than, say, a pellet rolled oolong, when in actuality the weight is lower. Secondly, packing the leaf in will make the tea last many more infusions. The second big step is using very short infusions. When I prepare Yen Cha, the first 4 infusions are generally instantaneous--as soon as the water has filled the pot or gaiwan and the lid is on, I begin pouring. Because there is so much leaf, there's a danger of oversteeping. If you keep the first few infusions short, you'll be able to really appreciate the changing character of the tea from steep to steep. After the first four infusions, I'll generally increase the infusion time by about 10 seconds per go, up to about 45 seconds, then by 15 seconds for two more, and a couple extra long infusions to see if the tea has any juice left. The third tip is to use a pot or gaiwan that retains heat very well--this porcelain gaiwan is a good device for accurately conveying the flavor of this yen cha, but a nice thick, high-fired Yixing clay pot will keep the temperature high, allowing the water (as close to boiling as possible) to extract as much flavor as possible, which is key during later infusions. Following these three principles (which differ quite a bit from more standard gong fu practices) has really helped me get more mileage and enjoyment out of my Yen Cha, and goodness knows I drink a lot of Yen Cha.

The flavor you should expect from a good Yen Cha brewed in this fashion should present a balance between the tea's roasting level (which varies from tea to tea) and the flavors of the tea leaves themselves, which also varies from cultivar to cultivar, but ranges from fruity to flowery to creamy to spicy, depending on the Yen Cha. Mouthfeel is usually pretty thick and a bit of mouth-watering astringency (due to the teas' roasting) generally starts to mount in later infusions, and many Yen Cha possess a pleasant and active acidity that tends to sparkle on the tongue. Really good Yen Cha will also exhibit what the Chinese call "hui gan," which is literally untranslatable, but roughly means something like "returning aftertaste." That is, the tea's flavor remains in your mouth after drinking, and is often enhanced with your breathing.

I'll be back soon with my impressions on our new Da Hong Pao and Rou Gui!