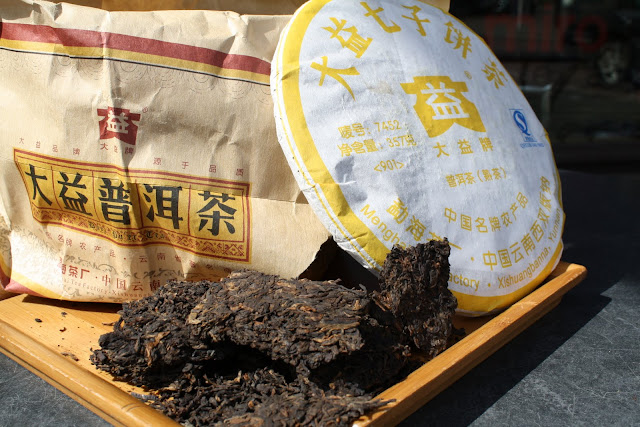 It's been quite a while since we've had new ripened (cooked) pu-erh offerings at Miro Tea; a few months ago we sold out of the last of our 2007 Chang Tai Red Crane cakes, and shortly after our 2006 International Tea Expo Memorial cakes disappeared--a lot of customers have asked after the teas, wondering when we'll be restocking them.  Sometimes the unfortunate thing about the aged pu-erh world is that once something is gone, it's really gone--our supplier sold out close to a year ago, so all we have of those two cakes is memories!  Fortunately, though, it's also an opportunity to try some new teas, thanks to our new partnership with Yunnan Sourcing!  We have three new (to us) ripened/cooked pu-erh cakes that are already available at Miro for your tasting pleasure--Jeannie has introduced a couple of them at our weekly tea tastings (Saturdays at 1 pm) and they've gone over quite well.
Before I launch into notes about one of our new cakes, it might be helpful to reference the introductory article that's been on this blog a few years already.  We get a fair number of customers inquiring about this strange pu-erh tea they've had once or only heard about, but in most cases it turns out that they're more specifically looking for ripened or cooked pu-erh.  It's the one that looks extremely dark in the cup (sometimes almost black) and is usually extremely smooth in the mouth, with full body, earthy flavor and often times a nice round sweetness.  Raw/green pu-erh, on the other hand, looks much lighter in the cup, has more of a straw-like flavor, is often bitter and astringent, and only develops rich smoothness after many years (often decades) of careful storage.  If you don't care to reference the lengthy article, here's the main thing that separates ripened pu-erh from raw: ripened pu-erh is artificially aged over a short period of time using a special process not unlike composting wherein the leaves are heaped, sprayed with water and change physically and chemically due to the autothermal generation of heat.  The piles are shifted by knowledgeable tea masters to ensure their even processing, and when they're ready, the leaves are usually compressed into large cakes (just like raw pu-erh). 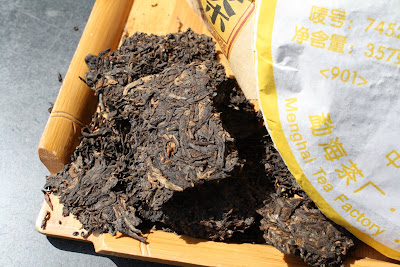 This, the first of our new offerings, is a 2009 example of Menghai Factory's 7452 recipe.  One sentence in, and I've already mentioned some of the classic confusing pu-erh details.  What's Menghai?  Well, Menghai (pronounced mung-high) is both a county in China's Yunnan province (where all pu-erh comes from) and the name of the most famous pu-erh producing factory.  Therefore, it's possible to describe a tea as "from" Menghai without it being from Menghai factory (as you'll see with our next tea).  Menghai Factory is widely believed to be the first factory to have perfected the processing whereby ripened pu-erh is created, though there's some disagreement as to whether it was back in the 1950's or later around the 1970's that this was accomplished.  Either way, their recipes are tried-and-true in the pu-erh world and we're happy to be able to share with you an example of "industry standard" pu-erh.  Speaking of recipes, the final confusing issue is that of recipe number--7452 is read as "seventy-four five two."  "Seventy-four" refers to the year the recipe was created (1974), "five" refers to the average grade (size, corresponding from low to high) of leaves used, and "two" is Menghai Factory's "code"--any recipe tea purchased from Menghai Factory will always end with a "2."
Many Menghai recipes are made every year.  This one, in fact, isn't--there's a red ribbon embedded in each 357 gram cake denoting its status as a special release.  Unlike raw pu-erh, which takes decades to mature, ripened pu-erh is ready to drink immediately.  This doesn't mean, however, that it won't improve with age--the fact that this tea's already a couple of years old means that any sharpness or "fermented" taste from its processing has had some time to mellow and the flavors are well-blended.  The reasonable percentage of buds visible in the cake indicate that it'll have some sweetness or at least some nice higher notes in the flavor.  It doesn't disappoint in that regard--the first thing to come out in tasting was a nice malty sweetness.  The body of this tea is also somewhat light for a cooked pu-erh, which can be a nice change of pace from what is often a rather heavy tea genre.  Of our three new pu-erh teas, this is my pick for gong fu brewing--you might need to use a few more leaves than usual (I'd recommend at least 7 grams for 100ml), but the blend of leaves produces a nice session that really gets going after the first two infusions--full of changes on the palate, varying degrees of mouthfeel and a welcome bit of complexity.  Brewed long in a mug or pot, the tea is quite flavorful, packed on numerous different levels.  There are more "boutique" brands of ripened pu-erh, but Menghai Factory continues to deliver quality tea at extremely affordable prices--this 7452 cake is a solid stand-by and a good reference to which our customers can compare other teas. 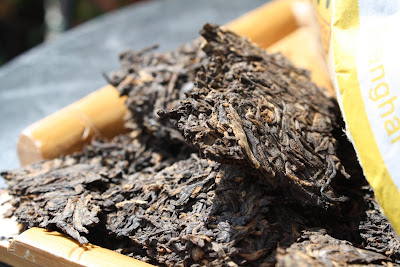