Gong Fu (also known as Kung Fu) isn't just for martial arts! In reality, Gong Fu is a much broader term used to describe a skill that has been cultivated through long and hard work--in the world of Chinese tea, Gong Fu Cha is second to no method for getting the most flavor possible out of a tea. This post will lay out a practical method for Gong Fu Tea--although traditional Chinese Gong Fu Tea has very specific tools and steps that are used (often for treating guests to a delicious cup of tea), here we're most concerned with the best flavor out of the leaves, so the approach will be utilitarian.

In a general sense, Gong Fu is the best method for extracting a tea's flavor because it does so bit by bit, over the course of short infusions. If you think of a tea leaf as a whole unit, infusion in hot water extracts a certain amount of flavor per unit of time. For instance, a traditional Western style brewing of a green tea (using about a teaspoon of tea per 8 ounces of water) is likely to last about 3 minutes. In the course of those 3 minutes, I'd estimate that about 40% of the tea's flavor is extracted into the water, leaving 60% to be extracted in one or two later infusions. Because the leaf-to-water ratio is low, that much flavor doesn't result in a bitter cup--it'll probably taste pretty good. Part of the magic about premium tea, though, is that really nice teas have such complex flavors that you can notice slight changes between every infusion. If you're taking 40% of the flavor out in one long infusion, you'll be missing out on the complex, varying flavor changes that occur as the leaves release certain percentages of their flavor. The philosophy behind Gong Fu, then, is more like this: Use a smaller brewing vessel with a higher leaf-to-water ratio, short infusions (starting at 10-20 seconds each and increasing as soon as the flavor starts to decrease), and you'll be extracting more like 5% of the leaves' flavor with each infusion, producing smaller cups of extremely flavorful tea, and tasting the flavor variations that occur with each infusion. Here's how to do it: 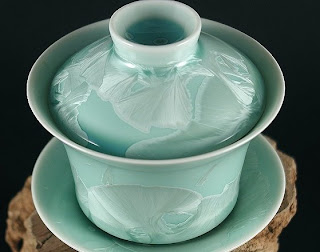 The tools you'll need for basic Gong Fu Tea are few: Tea (of course), a small (ideally 150 ml or less) clay pot (Chinese Yixing recommended [more on Yixing Pots later]) -or- a Gaiwan (a Chinese porcelain covered cup, shown right), and hot water. That's all you really need, although a few optional tools can make things easier to measure and clean up: a scale for precise tea measurement, a reserve pitcher (recommended if you're planning to serve multiple people), and a tea tray to catch stray water.

Getting Started:
This "How To" will focus on using a gaiwan, since Yixing teapots are generally purchased with specific tea types in mind (matched to their shapes, clay types, and other properties), and gaiwans work equally well with any tea type, giving an accurate representation of the tea's strengths and weaknesses. Gaiwan literally means "covered cup," and a gaiwan consists of a saucer, a cup and a lid. Gaiwans are extremely useful tools because of their simplicity--all you have to do is put the leaves in, add water, and cover for the length of the infusion. When the time's up, open the lid just enough to let the tea out but not the leaves, and the lid will strain your tea for you! The lid can also be used to stir the tea during infusion to ensure that it's all wet. To start, fill your gaiwan about 1/3 full with tea leaves (in the pictures I'll be brewing a lovely Lu An Gua Pian green tea in a 120 ml gaiwan). If you want to be more scientific, I recommend a heaping teaspoon or about 3 grams per 100 ml of water. 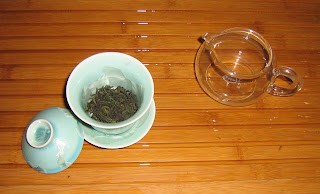 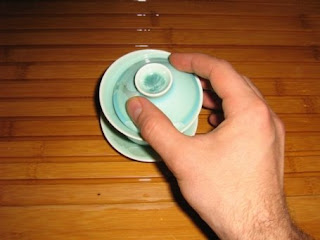 Next, briefly rinse the tea leaves (for 5-10 seconds, about 20 for pu-erhs) with hot water, pouring the water on the wall of the gaiwan first (especially for delicate green teas). This step is especially important with oolongs and pu-erhs, since it not only washes the tea leaves of anys undesirable residues or flavors, but it also allows them to open up a little so your first infusion will be flavorful, and it pre-heats the gaiwan so water temperature will be more constant during infusion. If you're 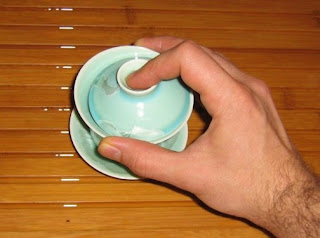 brewing green or white tea, you'll want water that's around 160-170º F; for light- to medium-oxidized oolongs, 190-200º is ideal; for black teas, pu-erh teas, and highly oxidized oolongs, as close to boiling as possible is the best temperature. Check out the pictures to see how to use the gaiwan--only a slight crack is usually required to let the tea liquor out, especially if the leaves are fine; as they expand, it will be easier to hold them back. Adjust the lid before picking up the gaiwan (top), grip the gaiwan around the rim, using your index finger to keep the lid in place 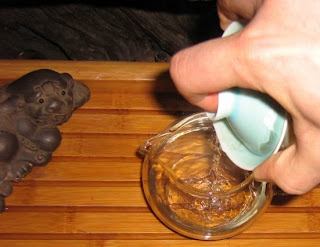 (middle), and pour (bottom)! Sometimes it helps to give the gaiwan a downward shake when it's almost empty, sending those last few drops into the glass.


In these pictures I'm using a reserve pitcher, which ensures flavor consistency if you're serving tea to multiple people. I like to use one when drinking tea alone because it helps cool the tea to drinking temperature more quickly, and it allows me to make two cups of tea in quick succession. Now that you've rinsed the tea, take the lid off and smell! The addition of heat and water brings the aroma out in a big way, and the deeper you inhale, the better it smells! This is one of my favorite steps. Now that you've become acquainted with the aroma of your tea, it's time to brew. As you taste each infusion, you'll likely appreciate the different flavors that you smelled in the aroma earlier. 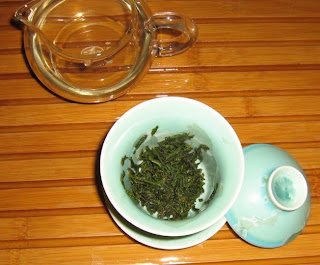 As you can see, the rinse has allowed the leaves to open up considerably compared to their dry state.
For infusion, simply pour the water on the tea leaves so they fill the gaiwan comfortably and evenly. If the leaves are cramped, they won't release their flavor evenly. The beauty of Gong Fu tea is the control you have--start your infusions at 10 seconds each. If the flavor isn't strong enough, add on a few seconds. As you improve your method, you'll also be able to tell the tea's strength by uncovering the gaiwan and looking at how dark the liquor is. Brewing tea Gong Fu style, if you get to the point where you have to infuse over 1 minute to get flavor, that's a pretty good sign that your tea leaves are out of flavor, but it's all up to your personal taste. 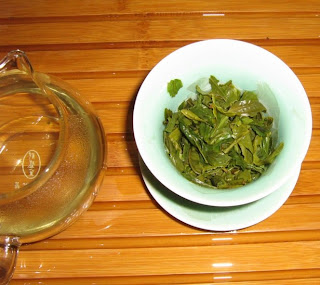 The spent leaves have expanded quite a bit--it's a great idea to check out the quality of your tea leaves after they've been infused.

Although brewing "Western style" is pretty quick and convenient--especially with non-premium teas, Gong Fu will always be tops when it comes to uncovering the complexities of high-quality teas, one layer at a time.

Thank you for those instructions! I'm still searching for the best approach for pouring, and will definitely try yours out.

Quick question - may I ask where you bought your beautiful gaiwan? I've been looking for a pale green one for a while, and one like yours would be perfect.

Thanks for your interest! The gaiwan comes from the Eilong Studio in Taiwan, and I picked mine up at Hou De Asian Art (http://www.houdeasianart.com). I think they're out of stock at this point, so Eilong studio is probably the easiest way to track one down.

From Wesley's The Green Tea Review, I followed your comments about his pot to this blog. What a joy it was to read about the Gong Fu Tea process.

As a complete novice concerning tea, I am bookmarking all the interesting tea blogs and reading them over and over to gain knowledge as quickly as I can.

My wife and I live at the foot of Emei Mountain, right in the middle of zhu ye qing country. We both have become tea enthusiasts and will begin traveling specifically to tea areas in our China Adventure.

One thing for sure, this is going to be a lifelong adventure. Thanks for all the information at this site