Oolong: Not "A Black Tea"

Every once in a while, a customer will come into Miro, approach the counter where we offer samples of four different teas each day, look at an oolong we've selected, and say "Oolong. Is that a black tea?" The answer to the question is a definite "No." Oolong and black tea are not interchangeable terms, and although there may exist some surface similarities between the two tea types, oolong's processing and source varietals are very distinct from those of most black teas. Despite the fact that oolong and black teas are very different, there is a surprising amount of variation in the processing, look, and flavor of different types of oolongs (probably more so than any other tea type), which can account for a lot of the confusion that people feel regarding this elusive tea genre. This entry will offer a brief synopsis of characteristic oolong production techniques and types and will hopefully take away some of the mystery that surrounds this hallowed tea in the West and provide a tempting introduction to the exotic flavors and aromas that oolongs can offer.

Overview:
Oolong (also transliterated from Mandarin as "wulong") literally means black ("oo/wu") dragon ("long"). Its origins are Chinese, and generally placed somewhere before the 16th century, which is relatively recently in the history of tea. Since then, oolong tea has been introduced to Taiwan (1800's) and much more recently to India and Nepal, among other minor tea-producing regions. Broadly speaking, oolong occupies the hazy gray area between green teas and black teas, mostly because of its oxidation levels--whereas green teas are virtually un-oxidized and black teas are "fullly" oxidized (100%), oolong's oxidation can range anywhere between 5% and 70% oxidation, which accounts for the broad variation in oolong flavors and characters.

Processing:
The first step in oolong processing is, of course, plucking the leaves. While green, white, and black teas tend to prize the unopened buds and young leaves of the tea plant, oolong can be more described as a "mature leaf" tea, since plucking often includes some very large leaves, which would usually make pretty low-quality green tea (or even lower-quality white tea!). Hand-harvested oolongs (pictured on the left, click to enlarge) are always prized higher than machine-harvested ones (pictured on the right, notice the much more frayed leaf edges), since hand-harvesting results in a more pure leaf profile and the leaves that are picked are usually in better condition. However, machine-harvested tea is cheaper and is sometimes very high-quality in flavor and in appearance. 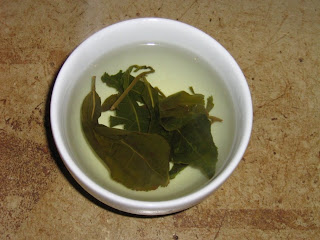 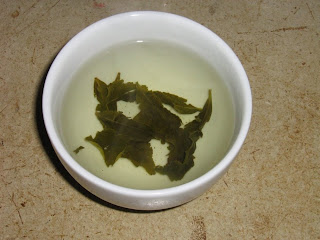 After plucking, the leaves are withered in open air to reduce moisture content. Next, they are bruised, which is usually accomplished by shaking and hand-pressing them in bamboo baskets. The bruising process breaks down the cell walls in the leaves, releasing the juices and flavors to be exposed to air. The oxidation of the tea leaves primarily occurs during the bruising and withering stages, and depending on how long the tea-maker spends performing each step, a very different type of oolong can be produced. Obviously, these steps involve great skill, from the motions required to bruise the leaves to the practical knowledge of how long each step should be performed, taking into account the weather and temperature as well! By the end of bruising, the leaves become much suppler than they were after withering, and much of their aroma and flavor has been fixed.

When the leaves have reached the desired oxidation, they're fired to kill the enzymes and stop the oxidation process--just like with green and pu-erh teas, but after a much longer oxidation time period. After this short firing, the leaves are rolled. Each oolong type has a special rolling profile (more on this later), and these are achieved by rolling the leaves and heating them repeatedly. During rolling, more of the juices are released and affected by the heat, which also contributes to the flavor of the end result.

Finally, the rolled leaves are roasted. This is another factor that varies considerably among oolong types. The tea-maker will roast the leaves twice; the first roast is short with high-heat, designed to fix both the chemicals of the tea as well as the shape. The second roasting process is usually lower heat for varying longer amounts of time. This slow-roasting period improves the flavor and color of the tea, and also gives oolong the advantage of lasting for a large number of infusions. Back when I was first learning about tea, oolong was mysterious--"it's the only tea that you can steep more than once" was what I heard. While that's not the complete story (most high-quality green, white, yellow and pu-erh teas are capable of a few or many delicious steepings), it's true that oolong is well above the average in this department. Really, its only competition is aged sheng pu-erh, which increases in steep-ability as the years roll by. After rolling, the oolong is allowed to cool, then is graded and packaged for sale.

Internationally, oolong has developed a reputation as something of a "connoisseur's" tea. There are a lot of oolong fans out there and there are plenty of internet forums and websites dedicated to the art and enjoyment of Chinese and Taiwanese oolongs. Oolong possesses a complexity of flavor and character that changes throughout multiple infusions and based on different brewing parameters, which lends itself very well to connoisseurship. Despite these excellent characteristics, oolong isn't necessarily "better" than green tea, white tea, pu-erh, or any other tea type--oolong is very accessible because its aroma is generally very pronounced and it often tastes like flowers or fruit, with which people are familiar. Green and pu-erh teas tend more toward the "acquired taste" end of the spectrum, but high quality examples of either one are just as deserving of praise as premium oolongs. Luckily, we get to enjoy all of them. My next few entries will focus on the four most famous oolong-producing regions and the typical flavors and appearances associated with each, featuring examples of each. They are: